Caldera views ~ a day in the life of a cave dweller…

Among the many ‘strange/odd’  questions I get asked by readers….is whether I ever get sick of the view. Whether it becomes ho-hum, whether it gets boring looking at the same thing on a daily basis.

So… for the benefit of those that have never been to this Santorini and/or have never gazed out over the caldera for any length of time… I thought I would let you into a secret.

“It never get’s boring…. because it’s never the same”. Certainly not the same from day to day, or even hour to hour… depending on the time of year, time of day, weather and even the very spot you sit to look out on this wonder of the world.

I could write pages and pages on this… but figured it’s probably best to let some images speak for themselves. Let’s look at some boats, of all sizes, that typically sail past the house. The following four photos were all taken on the same day… the first three being early morning, all within 30 minutes of one another: 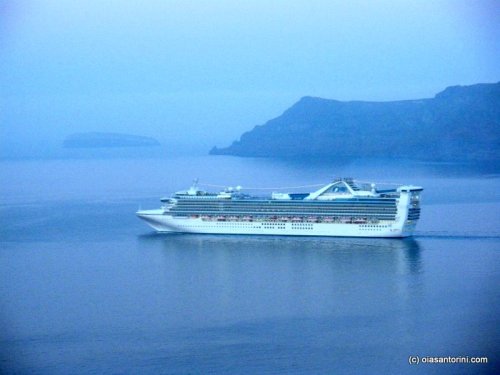 first up was my favorite cruise ship… the mighty Princess, probably one of the largest ships around… almost totally silent as she glides in at daybreak ! 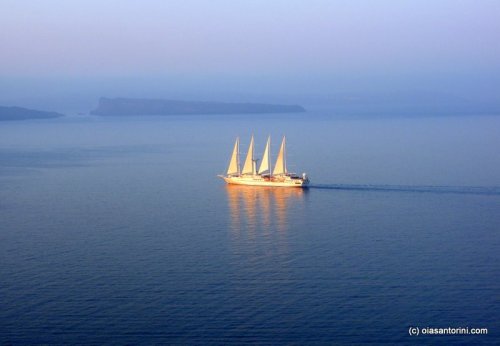 then… even more quietly, the sublime site of one of the sailing cruise ships that frequent the island. To see this just after sunrise… in the full glow of the early morning sun, is one of life’s exquisite little pleasures.

All this… in less time than it takes me to finish my cup of coffee. 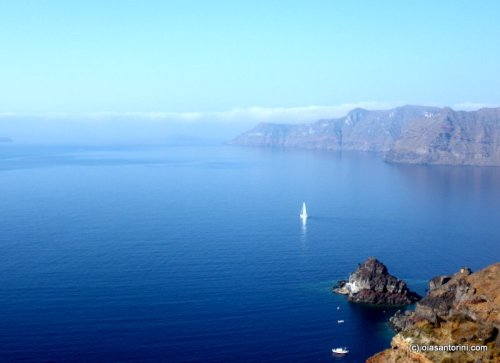 ten minutes later… a young couple (as seen through the binoculars) were sailing
past, probably heading to another island. Just a tiny white spec on the magnificent blue of the deep caldera below me.

All this was just as the island was waking up. The parade is endless during peak summer… with dozens of boats/ships making their way in and out. The light changes… therefore the water color changes and if there is a hint of a light breeze, there are magnificent paintings that appear on the blue surface. It is a living canvas thats constantly changing… always capturing your glance, becoming ingrained in your mind for ever.

And then… then there is sunset. If there is a better somewhere on this planet I’d like to hear about it… 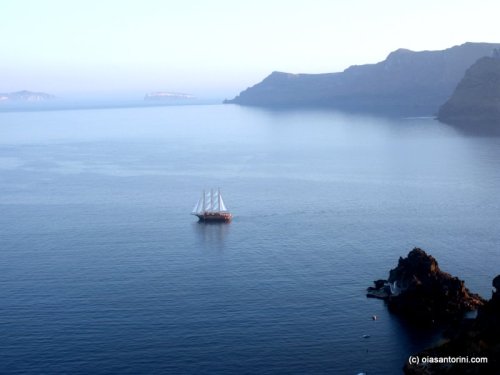 this is a sunset image of the caldera for me… nightly. This is one of at least half a dozen old sailing ships that do the sunset/twilight cruises… offering the most incredible images to those of us lucky enough to watch them from above…

So… to those of you  wondering, the short answer is NO… I do not get sick
of the view ; )

Happy summer to you… or warm winter if you’re down under !