It’s been a busy summer and I haven’t been able to spend anywhere near enough time with Alessi as I wanted to or should have. But this morning we decided to go to Ammoudi for a swim together, at our usual spot away from the tourists that flood the tiny rock beach.

It’s a good thing that most tourists don’t stay long enough to learn all the secret spots on this island. Ammoudi… the little port below Oia becomes very busy in August, all the small tavernas working hard to make the most of the busiest month. The small beach opposite
St. Nicholas island is also a very popular spot and for good reason. The water is absolutely crystal clear and very deep… making it cool and refreshing in the middle of summer.

I took up my usual spot on the rocks….

It doesn’t look like much… but the flat rock that’s constantly washed by the sea and a wet, folded sarong for a head rest, feet hanging in the water… pure bliss for several hours. You just have to take a step and you’re in the azure water… 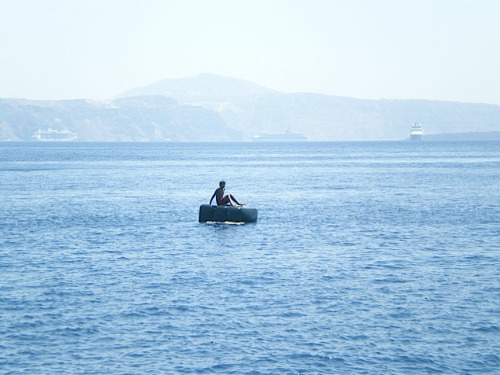 We sat there for a couple of hours, enjoying the sun and the beautiful clear water. Our little island is a favourite in summer as well as winter…when there is nobody else here. That’s certainly not the case in August though… it’s a fight for space for most tourists, unless they are willing to venture out into the lava rock formations. The small island is a magnet for people throughout summer and it’s not surprising…

It’s only a 20m swim across from the main island and the water is just too perfect for words. What a lot of people don’t realise is that around the small island there is 2-3 meters of rock… followed by a sheer vertical drop of more than 1,000m depth. Imagine what it would look like without the water…. would make Grand Canyon look like a creek.

Here is a view from the top of the cliff in Oia… looking down at the small island in late winter:

To the right of the small island you can see a lagoon forming, around 20-30m deep… you can drop a coin and watch it all the way down on a calm day. To the left of the small island…lololol, you can drop whatever you like there folks, you are NEVER going to see it again.
It’s a loooooooooong way down. A scary thought as to what this scene would look like if the sea water wasn’t there.

Just another day at our local beach and small island…. another little adventure in this mystical island called Santorini !

Have a great weekend and I hope you get to spend some time with your kids too ;-)